Protecting Your Stove and Chimney From Tar

Brought in to help relieve pollution and smog in the 1950s, smokeless coal remains a popular choice of fuel today.

Generally, it’s cheaper and longer lasting than wood. I also find the heat from smokeless that bit more intense. But like any fuel, smokeless needs to be used properly in order to get the best from it.

Always Clear The Grate and Ashpan Before Lighting a Smokeless Fire

Mineral fuels such as coal need air from below to combust, so it’s important air can flow through the fire. Restricting the air flow will either result in the fire not catching at all, or it will burn at a really poor rate and you’ll get no heat from it.

This is a really common mistake which people make. There’s a few reasons why it’s a bad idea.

Firstly, as mentioned above, smokeless needs air from below the grate to combust. However, wood only needs air from above. So burning the two in the same fire is highly inefficient for both sets of fuels.

Also, and this is becoming more and more common, mixing the fuels can prompt premature liner failure. The reason is that the moisture from the wood (even dry wood has some moisture content) combines with the sulphur in the smokeless fuel to create an acid which attacks flues, particularly stainless steel liners.

You CAN of course use dry kindling wood to start a smokeless fire, but I strongly advise against using wood as a main fuel on a smokeless fire. My advice is stick to just one fuel type (either smokeless or logs) in a fire and burn it hot.

Even though it comes bagged up, most smokeless ovals are left out in fuel producers and merchants’ yards in all weathers before being bagged. And even if they’re not left out, the coal can ‘sweat’ in plastic bags.

Putting wet smokeless (or any fuel come to that) on a fire will cause it to burn at really low rate. The moisture from the fuel will go up the flue and cause damage, particularly if you have a stainless steel liner. It also causes a really unpleasant ‘goo’ in the stove and on top of your stove’s baffle/throat plate.

The best way round this is to invest in a good coal bunker which allows your smokeless coal to air dry. Even if you buy your smokeless in bags, tip them in to a bunker before using them.

There’s always a temptation to slow down a fire, either in an attempt to make it last longer or in order to reduce the heat, by turning down the air controls on your stove. Don’t do it.

The fuel will still burn, but more smoke and moisture will be emitted. This is not only bad for the environment (and make you Public Enemy Number One among your neighbours) it will ruin your flue. Moreover, you’ll get no heat out of it so you will be wasting your money.

If you’re finding the heat too much, open a door or a window. It’s much better for the stove and flue. As for the old excuse of people liking the fire to still be ‘in’ when they wake up, it’s just as simple to clear the grate, put some fuel on and start a fresh fire.

Not All Coal Is Equal – Check Before You Spend

Some smokeless coals are not approved for use in Smoke Control Areas or in multi fuel stoves. Also, never ever burn traditional housecoal in a multi fuel stove. This type of fuel can – at the time of writing – only be used on open fires in areas where there are no restrictions on burning. It also creates a heck of a lot of soot and, because of the amount of dust it contains and the gases it produces it can actually cause a ‘flash’ and possibly shatter stove glass.

Conclusion: My Thoughts on Smokeless Fuel

Smokeless fuel has had a bit of a bad press among sweeps in the past few years. This is largely because of the way people have burnt and and we are seeing the consequences; damaged liners. It’s true that the type of soot produced by smokeless is slightly more acidic than wood soot, so of course that in turn would make it slightly more corrosive. It is also a fossil fuel so not as great for the environment as seasoned wood. But I have customers who have burnt smokeless fuel for years, largely because they’ve been shown how to use it correctly. And that’s the nub of it; used correctly in an appliance which has been properly fitted and regularly maintained/swept, smokeless fuel can really work for you. 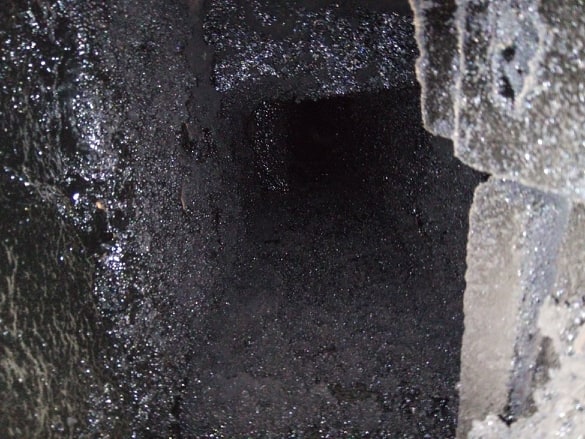 Protecting Your Stove and Chimney From Tar